During the two weeks Tracey Snelling spent in Tennessee, she sampled barbecue and a meat-and-three, was encouraged to try Prince's Hot Chicken, and was considering a road trip to Chattanooga and other stops along I-24. Mainly, however, the Oakland, Calif., artist worked on the installation of Woman on the Run, her mixed-media project on view at Frist Center for the Visual Arts through Feb. 5.

Film noir intersects classic comic strip in Snelling's tabletop vignettes and stage set-like mockups of brownstones, dingy motels and desolate street scenes that chronicle the desperate flight of a woman named Veronica, who has either been framed for the murder of her husband, or who finally had enough of the not-so nice Victor and did him in.

Woman on the Run opens in a tomato-red gallery with a comic strip panel wrapping around one corner and a large brownstone filling another. The windows of the brownstone pick up the story, as video clips play in its windows, some showing black-and-white scenes of a private eye monitoring Veronica, others showing her on the run. Still photos fill the rest of the windows.

Woman on the Run began as a commission from Selfridges, the London flagship of a UK department store, after Snelling's work was spotted in a London gallery. Having majored in studio art with an emphasis on photography, Snelling says she found herself moving into collage and was especially fond of incorporating images from 1940s Life magazines into her work.

She made a collage of a brownstone whose front wall was missing, exposing the rooms within -- ala Romare Bearden -- and then started making 3-D buildings with collage elements. Finally, she lost the collage and made her first small-scale hotel sculpture.

"I look at them and think they're so simple," she says. "I put the bare minimum of details I think I need to accomplish what I'm trying to do."

What Snelling refers to as imprecise most of us would consider richly detailed renderings of buildings, complete with working street lights and neon signage, scaled-down furnishings and synched video visible through tiny windows. Snelling concedes she had to create perfectly scaled models to guide the prop house tasked with making the Selfridges pieces.

"They installed it and it looked really amazing," she says, adding that she found them too pristine, and thus went at them with a hammer and brown paint to give the structures a lived-in look.

The present and fourth incarnation of Woman on the Run is the largest; Snelling had to add a few elements such as the strip and a large-scale billboard onto which images from the various videos will be projected. She also took the backs off the original brownstone and used them to make two additional structures adjacent to the original hotel room now placed in the second room of the Frist Center show.

This room, which viewers can enter and walk through, is decorated with peeling floral wallpaper and a sagging bed covered in faded linens. Veronica's old, battered suitcase is open, revealing a blond wig and a trench coat; a pair of black shoes lies discarded on the floor, a black bra hangs from a door handle.

A newscast about the murder plays on an old TV set and film clips can be heard through the receiver of a heavy black rotary phone. The room opens to a back alley defined by a projection of a street scene and a trashcan prop.

Snelling says this is the first time the installation has been presented in the round, so extra attention had to be given to the setting -- added details include peeks into other buildings and deep blue walls suggesting pre-dawn hours. She also has created the illusion of a city block with additional buildings.

Snelling's use of darkness and lonely interiors are reminiscent of Edward Hopper's paintings; her selection of props and sets also evokes the masculine milieu of Philip Marlowe with just a hint of vintage femininity and forlorn glamour.

There's an undeniably cinematic quality to Woman on the Run, and Snelling will explore that genre further with her next project: a 10-minute film short she's hoping to finish in time for next year's Sundance Film Festival. She's been granted an extension and is heading to Twentynine Palms, Calif., for a three-day shoot.

Titled Nothing, the film features a woman trapped in a dead-end town with a loser boyfriend; her only escape is to imagine herself in the lives of the occupants of the fleabag motel where she cleans rooms. Snelling says the film will end not with the woman driving off into the sunset, but with her pulling out then having to stop for gas.

As with Woman on the Run, Snelling eschews pat endings, opting instead for one that could go either way. 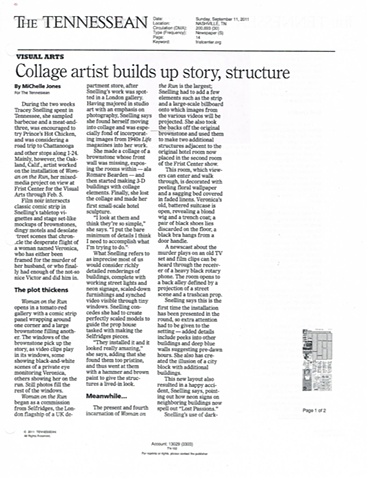 Tennessean review of "Woman on the Run"
< previous next >