Dimmed atmosphere. Suspenseful music plays. Glaring neon lights cast an eerie glow. This sets the scene for Tracey Snelling’s “Woman on the Run” exhibit on display at the Frist until February 5, 2012.

You’re transported to a different time. Think a 1930s private detective, complete with smoking pipe and trench coat. The clues are in the minor details of this twisted murder mystery.

The exhibit is based on the story of Veronica Hayden, played by Tracey Snelling, a woman on the run from the police after her husband with questionable behavior suddenly goes missing. Whether or not Veronica is indeed guilty of anything is left untold. There are no right and wrong answers to the “Who dunnit?” scenario. It’s up to you to decide if Veronica Hayden is an innocent woman or if she’s on the run.

The exhibit starts with a comic strip on the wall, filling you in on Veronica Hayden’s past. It depicts her departure from the life she knew into one of downtrodden motels and grimy city outskirts. Her life is no longer a normal routine. Instead, she is always afraid of who’s coming after her, and she never knows what’s around the next corner.

Strategically placed projections show clips of her life: her husband helps her don her coat before he goes missing; Veronica frantically packs her things and leaves, constantly looking over her shoulder. These silent captions lend an unsettling feel to the atmosphere, pulling you further into the plot Snelling portrays. These videos are not only shown on large screens within the exhibit, but they can also be seen in the small-scaled models of the places Veronica Hayden visits.

Windows provide a glimpse into her down-spiraling life as she guzzles alcohol and frantically runs through motel halls. These minor details enhance the atmosphere and give you a deeper look into Veronica’s point of view. She’s scared. She’s paranoid. Is she innocent?

Snelling succeeds in immersing the viewer into a world of her own creation. The center point of the exhibit, a hotel room that Veronica had recently occupied, lends observers the opportunity to experience a part of her life on the run. Her belongings are haphazardly scattered about the room: a suitcase full of props for disguises lies open on the bed, her shoes are on the floor, and a black bra hangs from the door knob. Looking at the scene, you can almost feel Veronica’s sense of urgency and desire to escape whatever is chasing her. Whether she’s running from her guilt over killing her husband or from the suspicions about her involvement is left purposely unclear. This open-ended conclusion can leave a feeling of dissatisfaction when you leave the exhibit. It forces an inner debate about her innocence.

The “Motel” and “Woman on the Run” neon lights finish the scaled-down city landscape Snelling creates. With brick facades and a pile of assorted trash hiding in the corner, you truly get the feel of running through the city outskirts with Veronica Hayden. You are also being hunted. Snelling describes her character as someone “trying to escape her unwritten fate”.

“Woman on the Run” is an interactive story as well as a work of art. The exhibit is definitely worth checking out. Snelling’s work challenges each viewer to create their own perspective.

So the question remains: Guilty or not guilty? 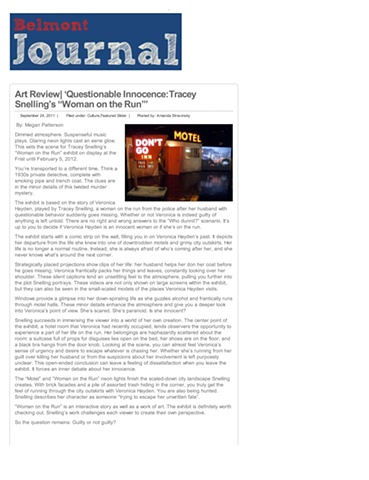 Belmont Journal review of "Woman on the Run"
< previous next >