"The title of the exhibition Where Mr Wong Sent Me is named after a famous fortune-teller from Hong Kong," explains Galerie Urs Meile artist Tracey Snelling. "Although he is now dead, I like the idea that I might have sat down with him and been advised where I would end up in my travels."

Snelling arrived in Beijing last fall from Oakland, California. As a part of the Galerie Urs Meile artist-in-residence program, she spent three and a half months around China, traveling through Guangxi Zhuang autonomous region (where she was inspired to create) before returning to the Caochangdi art district of Beijing to start working.

"What I found, in both my short yet interesting travels and in my experiences in Beijing, were unreal, surreal, fascinating, frustrating, beautiful, awful, crazy, mundane, and very wonderful experiences," says Snelling. Most of her work over the years has consisted of sculpture in combination with photography/film. She has exhibited in London and was initially introduced to the Galerie Urs Meile by a gallery in Chelsea. Before visiting China for the first time this year, she photographed and collected images in San Francisco's and New York's Chinatown districts.

"I'm really interested in different cultures and how they act, what they do, and how they live. What I've done is recreated my interpretation," Snelling says. Comparing the southern village of Yangshou, Guangxi, to her travels through impoverished places in Mexico, and even the Caochangdi area in Beijing, her work reflects her impressions of these people "living on the edge, in small places, like their storefronts".

Lights, sounds and images bring these miniature representations to life. "It's so different to what I'm used to and such a hard life," she says, referring to the non-artists-in-residence living in Caochangdi, "It changes so quick - the people here could be completely uprooted. And that's what I tried to capture; life caught in this delicate balance."

The installation Wang's House (pictured) was inspired by a character Snelling imagined living in one these places. After designing the one-room shed, she hired a local crew to help her assemble its thin aluminum walls and loosely connected rooftop. Its life-size vantage point allows you to go inside, where there is just enough room to fit a small single bed, squeezed next to a table with an antiquated TV. "Wang is just an 'average Joe'; watching TV, eating junk food and looking at pictures of pretty girls. He's vulnerable and unaware, without any responsibility for his conditions." 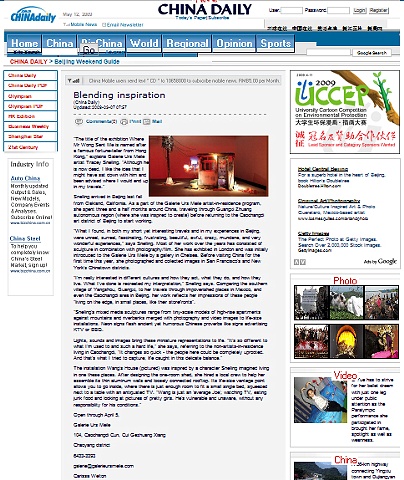