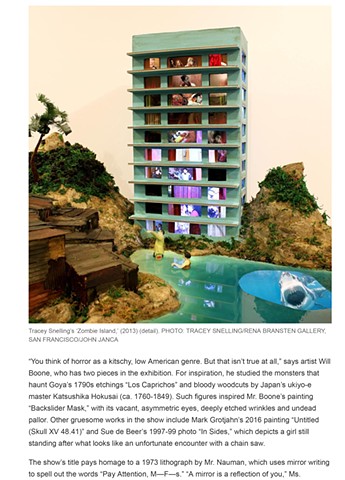 At the Aspen Art Museum, a new exhibition is bringing a touch of terror to the idyllic Colorado resort town. “Zombies: Pay Attention!”, which opened Dec. 21, includes 28 works by a group of artists that includes masters like Ed Ruscha, Bruce Nauman and Cindy Sherman. The show reflects America’s current obsession with zombies. from television’s “The Walking Dead” to the movie “World War Z” to Pulitzer-winner Colson Whitehead’s novel “Zone One.” Curator Heidi Zuckerman, who is also the director of the museum, has chosen some works that depict zombies directly, while others use the creatures as a metaphor or convey a zombielike mood.

The show demonstrates that serious artists are increasingly interested in the once-disdained genre of horror. Works include an eerie Cindy Sherman photograph—“it looks like a mostly buried, deceased person,” says Ms. Zuckerman—and a resin-fiberglass sculpture by Piotr Uklański, a Polish-American artist with a longstanding interest in pop culture. His 2012 “Rigor Mortis” evokes a ripped-out heart.

Zombies are unique in the world of monsters, says Roger Luckhurst, author of “Zombies: A Cultural History.” Vampires and mummies are generally individual characters and often have aristocratic origins, while the zombie is about “hordes,” he says. They can be seen as a “representation of mass culture, mindlessness of consumption or…the foreign other that is surging over our defenses.”

The word “zombie” may well stem from African terms that mean “spirit of a dead person” or “soul.” Transported to the Caribbean and connected to Voodoo and other religions that took root there, “zombie” came to America via a 1929 book about Haiti, “The Magic Island,” by the travel writer William Seabrook. By the 1930s, pulp writers, playwrights and Hollywood had taken up this version of the undead.

The museum will pay homage to the movies, zombies’ longtime commercial home, with a weekly selection of bloody films. They include the George A. Romero 1978 classic “Dawn of the Dead,” whose mall setting has often been seen as a satire on American consumerism, and “Warm Bodies” (2013), an unlikely zombie romantic comedy sporting the slogan, “He’s still dead, but he’s getting warmer.”

“Haze and Fog” (2013), a 47-minute video by the Beijing-based artist Cao Fei, will be shown continuously in one gallery. This horror fantasy is a collection of scenes set in a high-rise community in China in an imaginary near future. Some of the characters exercise, shop and put on clothes in a glacial trance; others hunt their neighbors for food. “Zombies and humans are coexisting in this space,” says Ms. Zuckerman, “but not harmoniously. It’s hard to tell which are zombies and which humans.”

Movies also figure in Tracey Snelling’s 2013 “Zombie Island,” a sculpture in which zombies, their arms in front of them in the classic catatonic walk, are shown coming out of a lake near a resort hotel. Ms. Snelling, 48, made the windows of the 10-story hotel display photos and video clips from zombie films, and projected film clips of shark attacks through the lake, which is made of resin. She sees the work as a commentary on “how people can blindly follow something and cause destruction,” as well as a homage to the zombie films of her youth, like “Night of the Living Dead,” and more recent ones like “28 Days Later.”

“You think of horror as a kitschy, low American genre. But that isn’t true at all,” says artist Will Boone, who has two pieces in the exhibition. For inspiration, he studied the monsters that haunt Goya’s 1790s etchings “Los Caprichos” and bloody woodcuts by Japan’s ukiyo-e master Katsushika Hokusai (ca. 1760-1849). Such figures inspired Mr. Boone’s painting “Backslider Mask,” with its vacant, asymmetric eyes, deeply etched wrinkles and undead pallor. Other gruesome works in the show include Mark Grotjahn’s 2016 painting “Untitled (Skull XV 48.41)” and Sue de Beer’s 1997-99 photo “In Sides,” which depicts a girl still standing after what looks like an unfortunate encounter with a chain saw.

The show’s title pays homage to a 1973 lithograph by Mr. Nauman, which uses mirror writing to spell out the words “Pay Attention, M—F—s.” “A mirror is a reflection of you,” Ms. Zuckerman says, explaining that Mr. Nauman’s work evokes our habit of looking outward, not reflecting inwardly. The Nauman work, she adds, “is the heart of the show. He didn’t make it about zombies, but I’m using it as a wake-up call.” When people shrug off the danger of attacks by the undead, she adds, “that’s why they become zombies.”