Desert Hideaway explores the idea of desert border locations and the gray areas of those places. Borders represent several different things. They are highly charged areas of contention, with disputes over who gets to come and stay and where the actual border lines exist. On another level, the borders are where people on the edge are often found: drifters waiting for their chance to cross the line, people who are lost in life, and those who travel across borders every day to make money, either legitimately or in some other fashion. Besides the political and social aspects of border towns, there is also a romantic notion of these places. During the day, hot sun drenches the sand and the asphalt on the lone highway turns sticky from the heat. The few people who are traveling through or live in these parts stay indoors when they can, swamp coolers straining to pump some cool humid air into small darkened rooms, with shades drawn and tvs playing infomercials, soap operas, and telenovelas. As the sun goes down, windows and doors open, life begins, and beneath the crimson sunset, things happen. A couple steal away out behind the motel for a late night tryst, the bar gets going with music from the jukebox and too many beers sold and spilled, a driver pulls his still-running car from the 1970’s off on a dirt side road to do something we shouldn’t know about… The border police chase down interlopers, and rattlesnakes and coyotes saunter and slither out of their cool dark places, looking for their next meal. The edges of society, whether it be a border of a country, town, or even ideas, mingle in an interesting sociological melting pot of different characters and personalities. 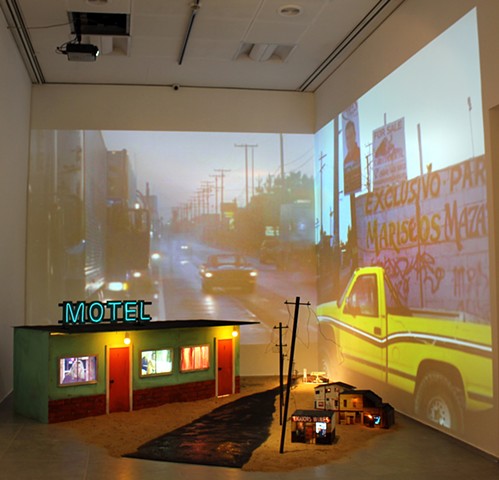