The dame was no damsel. She wore jeans as tight as a skinflint's purse. Her belt had big silver studs that glinted in the neon light.

"I do relate to her quite a bit," purred Snelling, who lives in a studio loft on the fringes of Oakland, Calif.

Snelling has been in the area more than a week to help assemble "Woman on the Run" inside a large gallery at the Virginia Museum of Contemporary Art in Virginia Beach.

Her installation is an unusual blend of walk-in environments, such as a motel room and a fortune teller's niche, with video, photography, neon, comics, a billboard and tabletop sculptures.

It's a lot to do. Fake brick walls have to be screwed into place. Video monitors must be hooked up. The wooden framework supporting her billboard has to be painted.

"There's over 150 pieces to this installation, when it's taken apart," she said.

A week ago, when the piece was hours from completion, Snelling toured her in-progress work. The experience is a voyeur's dream.

Especially a voyeur with a thing for film noir movies.

In crafting the tone of her piece, she looked to the seedy, sinister, shadowy tone of film noir of the 1940s and '50s.

That's the look, the style. But that isn't what the piece is about.

"It's important that we don't forget where we came from, so we don't go back there again."

The female stereotypes in such films were glaringly apparent. They usually featured only nice girls and femme fatales. The stories were mostly focused on men, who took action. Good girls were passive and did what they were told.

"The femme fatale usually would be very seductive and calculating," often triggering the downfall of the main male character.

"So I wanted Veronica to be something different, but she could fall into either role. Her taking off and going out on her own, she is the main character now," Snelling said. "And she could have either killed her husband, or she could be really innocent. It's left to the viewer what they think.

"Which then tells you something about who's viewing it."

"Woman on the Run" is a mystery imbedded in art.

You could call it 3-D storytelling.

There is no right way to experience this piece as it's set up at MOCA. You can just meander. Snelling suggested reading the comic book-style spread on the wall as you enter.

"Victor and Veronica Hayden lived a seemingly quiet happy life in a neighborhood on the edge of town," the tale begins. "Yet looks can be deceiving. There was something 'not quite right' with Victor."

Snelling took the photos of herself as Veronica at home. Something happens, we don't know what, and Victor vanishes.

Then Veronica takes off, and begins her motel-hopping lifestyle. She becomes the woman on the run.

Gallery-goers can peek in windows and watch short videos that offer clues. We see Victor tightening a scarf around Veronica's neck. We watch Veronica racing out of their apartment, luggage in tow.

Videos also play against walls. There's even one that plays on a billboard set in a larger billboard.

The motel room is full of clues. A phone is off the hook. Visitors can pick up the receiver and hear audio from film noir movies. Woman: "We have to stop now." Man: "How many people have I killed?"

The phone sits beside an old television playing a black-and-white video crafted by Snelling. The video presents a '50s-looking TV news report explaining that Victor Hayden is missing and his wife is wanted for questioning.

Veronica's a brunette. A platinum wig is part of her disguise, and sits in her own suitcase on the rumpled bed. Her black bra dangles from the door knob.

It's like walking onto a Hollywood set, only seedier.

"This isn't meant to be super conceptual," Snelling said, during the tour. "The whole point is to have the viewer interact and pretend they're in her shoes and figure out what happened."

She meant literally interact. "We want people to be able to touch it and experience it," said Idan Levin, Snelling's producer, who also came to the Oceanfront. The two planned to have a chat with security at the arts center, and tell them, "Please let people do this."

As in, please let visitors sit on the bed, pick up the phone, try on her wig, dig into her suitcase.

Not many artists allow the public to mess with their art like that. Snelling purchased most of Veronica's belongings at thrift stores - she's not too worried about people running off with an old trench coat.

Snelling first created the piece for the London department store Selfridges, which exhibits art and paid a London prop house to build the main structures for "Woman on the Run." It has since shown at top venues in New York City; Louisville, Ky.; Nashville, Tenn.; and Winston-Salem, N.C.

The fortune teller's room is a new addition to "Woman on the Run," premiering in Virginia Beach. Snelling and Levin devised a way to project a video inside the crystal ball, inspired by one she remembered from a haunted house ride in Disneyland.

Producer Levin is a computer whiz who manages the logistics of her complex installation and is helping her devise new projects, such as one involving what may be the first-ever use of a smart phone app for an art project.

That project will be a continuation of "Woman on the Run," using a scavenger-hunt approach adaptable for public spaces such as hotels.

Would Snelling divulge whether she believed Veronica was innocent or guilty?

"I don't even know. I never even think that far, to form an opinion. I just will keep it that way." IF YOU GO What "Tracey Snelling: Woman on the Run," an art installation Where Virginia Museum of Contemporary Art, 2200 Parks Ave., Virginia Beach When Through Dec. 30 Hours 10 a.m. to 9 p.m. Tuesdays, 10 a.m. to 5 p.m. Wednesdays through Fridays, 10 a.m. to 4 p.m. Saturdays and Sundays 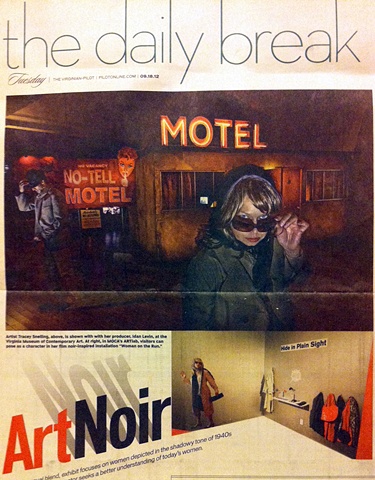 Virginian-Pilot review of "Woman on the Run"
< previous next >