My Clusterfuck installations are a combination of sculptures, video projections, lights, rugs, kitsch, images, and odd accessories. The installations are immersive experiences that place the viewers at the simultaneous conjunction of a multitude of different, sometimes opposing, cultures. Is it a view into the future world we will live in? A psychedelic version of a "Blade Runner" scene? Or perhaps the clutter in one's own mind?

Video clips from Bollywood, rap musicians, Jamaican dance clubs, and a call to prayer, among other clips, overlap and compete in an aural and visual chaos with the soundtracks and videos from the jumble of sculptures in the space. The all-encompassing quality of the installation is designed to both over-stimulate the viewers and seduce/ensnare them.

Clusterfuck 3 features the detritus from my studio as I prepare to leave my space in Oakland for a long residency in Berlin. The accumulation of objects, books, old magazines, and props that have lived in my studio for many years are incorporated into the mess of Clusterfuck 3, adding an intimate layer to the installation.

This version of Clusterfuck is my messiest and craziest to date. 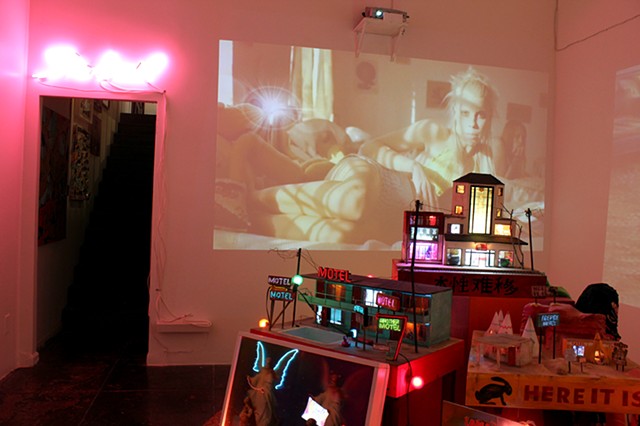