mixed media installation with sculptures, video, sound, lights, signs, beach towels, and lanterns In the ever-expanding world we exist in, cultural lines are crossed and meshed more than ever. With the internet giving anyone access to almost anyone else in the world, there is much excitement and energy with the sharing of new friendships and ideas. Although much of the focus in the news is on the negative aspects, I find the meeting of different cultures invigorating, thought provoking, and creatively inspiring. Through my travels in China, Mexico, Europe, and the US, I look for the constants that exist in us all, and show these, along with the unique differences, in Clusterfuck 1.

Mixed media video sculptures of China combine with Latin, Chinese, and beer signs, lanterns from China and Turkey, rope lights and string lights, Native American dream catchers, Indian rugs, sexy beach towels from Miami, carnival kitsch, and posters of bikini girls, monster trucks, Mao, Bruce Lee, and Chinese good luck images. Stereotypes from the cultures mix and mash with gift store tchotchkes. Signs saying "To pass off a fisheye for a pearl" in Chinese, "All talk, no action" in Spanish, and "The bad gardener quarrels with his rake", written in English in a Middle Eastern font with American flags and a beach sunset in the background, take on special meaning when shown in the Oakland City Hall.

The installation is an immersive experience that exposes the viewer to several cultures meeting at once. Is it a view into the future world we will live in? A sunny version of a "Blade Runner" scene? Or perhaps it is a place found in one's mind, a bright, wild, loud beautiful world where we coexist with another without conforming or contradicting. 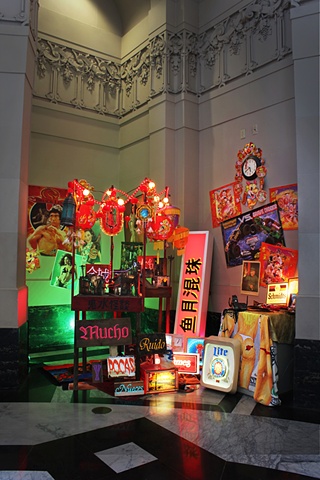